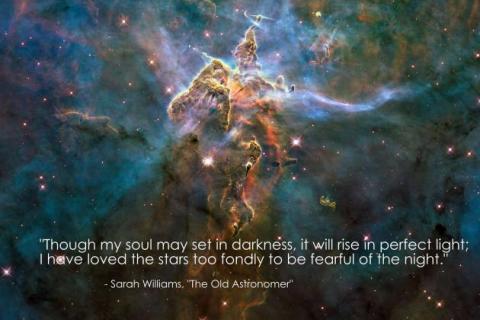 So today I am catching up with my dear friend Jenny, sipping our peppermint tea, and discussing our work as home funeral guides.  She recently took care of a friend who died---a good death actually since the friend had taken the time to plan ahead and not leave family second-guessing what she wanted.  One of those things was to have Jenny choreograph her funeral at home and direct her friends how to take care of her body during her 3-day vigil.

And then what happened after the vigil I wondered?  Jenny said the husband asked her to do a small service among the family and friends present.  Jenny said she used some elements from a standard Christian funeral service, and then ended with a song she had used many times before.  "It's a round," she said.  "So everybody joined in and it was just beautiful."

And this is the song Jenny uses, with some words many of us have heard before:

Though my soul may set in darkness,

It will rise in perfect light;

I have loved the stars too fondly

To be fearful of the night.

Then I found out this poem was written by a SARAH WILLIAMS!  She was an English poet and novelist who lived from 1837 - 1868.  These lines are from the poem, "The Old Astronomer," and it is said that many astronomers have used this quote as an epitaph!

For sure, I plan to incorporate this song the next time I am doing a home funeral, or even during a service where I am the funeral celebrant.  Twinkle, twinkle...